Jesus Thanks His Father
25 At that time Jesus said, ‘I thank you, Father, Lord of heaven and earth, because you have hidden these things from the wise and the intelligent and have revealed them to infants; 26yes, Father, for such was your gracious will. 27All things have been handed over to me by my Father; and no one knows the Son except the Father, and no one knows the Father except the Son and anyone to whom the Son chooses to reveal him.

28 ‘Come to me, all you that are weary and are carrying heavy burdens, and I will give you rest. 29Take my yoke upon you, and learn from me; for I am gentle and humble in heart, and you will find rest for your souls. 30For my yoke is easy, and my burden is light.’

Plucking Grain on the Sabbath
12At that time Jesus went through the cornfields on the sabbath; his disciples were hungry, and they began to pluck heads of grain and to eat. 2When the Pharisees saw it, they said to him, ‘Look, your disciples are doing what is not lawful to do on the sabbath.’ 3He said to them, ‘Have you not read what David did when he and his companions were hungry? 4He entered the house of God and ate the bread of the Presence, which it was not lawful for him or his companions to eat, but only for the priests. 5Or have you not read in the law that on the sabbath the priests in the temple break the sabbath and yet are guiltless? 6I tell you, something greater than the temple is here. 7But if you had known what this means, “I desire mercy and not sacrifice”, you would not have condemned the guiltless. 8For the Son of Man is lord of the sabbath.’

The Man with a Withered Hand
9 He left that place and entered their synagogue; 10a man was there with a withered hand, and they asked him, ‘Is it lawful to cure on the sabbath?’ so that they might accuse him. 11He said to them, ‘Suppose one of you has only one sheep and it falls into a pit on the sabbath; will you not lay hold of it and lift it out? 12How much more valuable is a human being than a sheep! So it is lawful to do good on the sabbath.’ 13Then he said to the man, ‘Stretch out your hand.’ He stretched it out, and it was restored, as sound as the other.

In the name of God. Father, Son and Holy Spirit. Amen.

END_OF_DOCUMENT_TOKEN_TO_BE_REPLACED

In the first book, Theophilus, I wrote about all that Jesus did and taught from the beginning 2 until the day when he was taken up to heaven, after giving instructions through the Holy Spirit to the apostles whom he had chosen. 3 After his suffering he presented himself alive to them by many convincing proofs, appearing to them during forty days and speaking about the kingdom of God. 4 While staying with them, he ordered them not to leave Jerusalem, but to wait there for the promise of the Father. “This,’ he said, “is what you have heard from me; 5 for John baptized with water, but you will be baptized with the Holy Spirit not many days from now.”

The Ascension of Jesus
(Mk 16.19—20; Lk 24.50—53)
6 So when they had come together, they asked him, “Lord, is this the time when you will restore the kingdom to Israel?” 7 He replied, “It is not for you to know the times or periods that the Father has set by his own authority. 8 But you will receive power when the Holy Spirit has come upon you; and you will be my witnesses in Jerusalem, in all Judea and Samaria, and to the ends of the earth.” 9 When he had said this, as they were watching, he was lifted up, and a cloud took him out of their sight. 10 While he was going and they were gazing up toward heaven, suddenly two men in white robes stood by them. 11 They said, “Men of Galilee, why do you stand looking up toward heaven? This Jesus, who has been taken up from you into heaven, will come in the same way as you saw him go into heaven.”

Matthias Chosen to Replace Judas
(Cp Ps 109.8)
12 Then they returned to Jerusalem from the mount called Olivet, which is near Jerusalem, a sabbath day’s journey away. 13 When they had entered the city, they went to the room upstairs where they were staying, Peter, and John, and James, and Andrew, Philip and Thomas, Bartholomew and Matthew, James son of Alphaeus, and Simon the Zealot, and Judas son of James. 14 All these were constantly devoting themselves to prayer, together with certain women, including Mary the mother of Jesus, as well as his brothers.

In the name of God. Father, Son and Holy Spirit. Amen.

END_OF_DOCUMENT_TOKEN_TO_BE_REPLACED

Today we come to another wonderfully long account from the life of Jesus in John’s Gospel – Jesus conversation with the Samaritan woman at the well.  It doesn’t matter if you believe this is a word by word account of the conversation, or a summary and interpretation of the conversation, today’s passage is the longest conversation that Jesus has with anyone in all of the Gospels, not to mention with a woman, who was a Samaritan ( a people who were openly rejected by Jews ).  For that reason alone, it is significant.  So let’s hear this passage with open ears.
END_OF_DOCUMENT_TOKEN_TO_BE_REPLACED

Starting from today we will hear, over the coming weeks, from the Gospel of John, some of the most wonderful accounts from the life of Jesus. Today the passage is about a Jewish man named Nicodemus coming to Jesus at night. Next week is the account of Jesus talking to the woman at the well. The week after is the long detailed account of Jesus healing the blind man. And finally the week before Palm Sunday is the passage about the death of Lazarus.

In all these passage it is easy for us to say “we’ve heard this one before”, and not open ourselves to what God is saying to us anew. It is easy for us to read them and not consider how powerful both the actions of Jesus were, and the message he gave. It is easy for us see these accounts as being from the life of Jesus in a distant past, and struggle to see how they are relevant for the present. So each time I give the message over the coming weeks, and as we hear these wonderful passages, I’ll be asking us the personal question: “where are you in this account from the life of Christ?”
END_OF_DOCUMENT_TOKEN_TO_BE_REPLACED 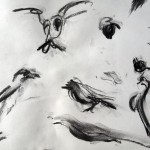 I have heard in recent weeks, both in Queensland after the floods and cyclone, and also in New Zealand after the earth quake, one or other leader suggest to people that they might like to leave the affected area, and go to stay with friends or family. It wouldn’t be an easy thing to do and at first it would be part of the emergency, part of the loss, but after a while it would be hard going I imagine, even with the best of family or friends to go to. It’s interesting to wonder where you would go if you had to. To which family? To which friends? How would you feel eating their food, having them offer beds for you to sleep in, living in their space, even asking them if you could borrow a jumper or shirt. END_OF_DOCUMENT_TOKEN_TO_BE_REPLACED

We have recommenced gathered worship on site at Gungahlin Uniting Church & Community Centre.

Worship seeks to be meaningful in different ways for us all. In Jesus Christ we see how he drew near to everyone, and so we hope our worship expresses this nearness too.

For more information on what worships looks like now during this time of social distancing, keep on reading.

END_OF_DOCUMENT_TOKEN_TO_BE_REPLACED

We are a community on a journey, we’ve grown from a small faith community planted in Ngunnawal in the early years of Gungahlin’s development to a thriving inclusive, intergenerational & multicultural community. As Gungahlin has grown we have seen a lot of change.

We are an open and inclusive community, everyone is welcome to use their gifts in worship, prayer, leadership, hospitality and teaching.

Worship is for all ages, (0 to 93!) and seeks to be meaningful in different ways for us all.

In Jesus Christ we see how he drew near to each and all and so we hope our worship expresses this nearness too.